Negotiating Respect: Pentecostalism, Masculinity, and the Politics of Spiritual Authority in the Dominican Republic. Gainesville: University Press of Florida, 2016 “Breaks new ground by virtue of its thorough exploration of the ongoing negotiations of Pentecostal masculine identities.”–Martin Lindhardt, author of Power in Powerlessness: A Study of Pentecostal Life Worlds in Urban Chile

“Provides important insights about why men convert to Pentecostalism, how they derive authority and status in Pentecostal churches, and how at the same time they reaffirm their claims to local ideals of masculinity.”–Elizabeth Brusco, author of The Reformation of Machismo: Evangelical Conversion and Gender in Colombia

“A nuanced portrait of born-again life . . . illuminates the Roman Catholic shaping of Dominican nationalism including its anti-Haitianism, evangelical masculinity, and the possibilities for gaining respect that Pentecostalism offers to entrenched gang members.”–Elizabeth McAlister, coeditor of Race, Nation, and Religion in the Americas

Winner of the 2017 Barbara Christian Prize for the BEST book in the Humanities. 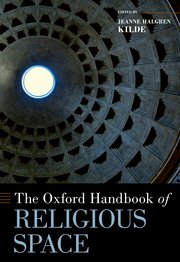 This chapter considers cosmography to be an especially productive but for the most part unexplored site of critical inquiry into Afro-Caribbean and Black Atlantic religiosity. Drawing on comprehensive ethnographic research with Spiritual Baptist Christians in Trinidad and Tobago, it calls attention to the dimensions of spatiality that orient Afro-Creole cosmologies and inform their ritual logics. By mapping the Spiritual Baptist universe and the sacred geography of Spirit that enlivens it, the chapter shows how complex theological concepts are reified by the faithful—how they take shape through practical substantiations—thereby highlighting the spatial dynamics underlying Spiritual Baptist epistemologies and the novel representational practices central to meaning-making in the church.

Religious studies is an interdisciplinary field encompassing a range of research methods and theoretical areas of analysis. Interest in ethnographic methodology has grown of late as scholars of religion with varying specialties and backgrounds have turned towards anthropology for inspiration on how best to analyze and interpret people’s variegated religious lives in the contemporary world. The special issue “Critical Terms for the Ethnography of Religion” considers eight key terms that are central to the conceptual grammar of the ethnographic method in order to highlight the opportunities and challenges this form of research offers the study of “lived religion”. By bringing together established scholars of religion who take ethnographic methodology seriously in their work, this special issue offers readers an opportunity to think with colleagues from across the discipline about what is at stake in their approach to studying, analyzing and writing about religion from an ethnographic perspective.

Fieldwork, a term frequently employed in religious studies to describe qualitative research with contemporary subjects in their own milieu, is a concept inextricably linked with the ethnographic project. Anthropologists have for years challenged and pushed the limits of what fieldwork is, where fieldwork takes place, and how fieldwork is conducted by asking productive questions about where exactly “the field” is located and what precisely constitutes “the work”. In religious studies, debates about ethnographic fieldwork, per se, are less advanced. Traditional notions of fieldwork in anthropology assume long-term engagement with folk and their communities. This often means living and working with research subjects for years, even decades. A critical reflection on the method and idea of fieldwork in religious studies brings to the fore important issues of legitimacy, accuracy and comprehensiveness in the study of “lived religion” and raises anew enduring questions about the ethics of ethnography when time, access and intimacy are ever-shifting and precarious.

“Refiguring Christianity and Black Atlantic Religion: Representation, Essentialism, and Christian Variation in the Southern Caribbean,” Journal of the American Academy of Religion 89(1): 41-71, 2021 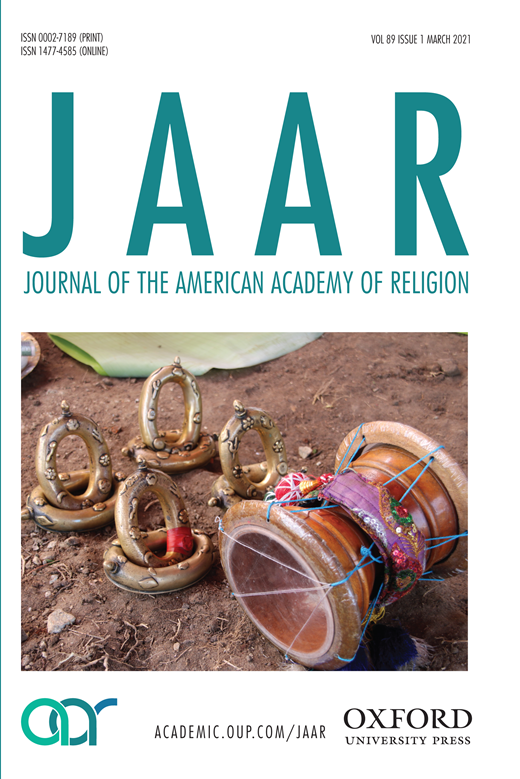 This article considers the analytic categories scholars use to conceptualize religious difference in the Caribbean and addresses the relatively sparse theorizing of Christianity in the study of so-called syncretic or creole religions of the African diaspora. I take the Spiritual Baptists of Trinidad and Tobago as a case study to shed light on the significant divergences between vernacular definitions of Christianity and those designations scholars use to parse and make sense of Afro-Creole diversity. I am especially interested in what is at stake analytically. Spiritual Baptists challenge conventional articulations of Christian orthodoxy and Black Atlantic religiosity by reconciling a “fundamentalist” Christian identity with an especially fluid cosmopolitan eclecticism. Drawing on comprehensive ethnographic research, I show how the unique permutations of creole variation within Spiritual Baptist faith unsettle deterministic equations of race and religion and contest the often manufactured oppositions between Christianity and African religion. In the Caribbean, marriage rates are lower than those of the rest of the world, and deferred marriage is more often the norm than the exception. While formal marriage is religiously valorized, it is commonly avoided and can be difficult to enact, even for the devout. This chapter offers additional insight into key dilemmas fueling marriage delay in the region by examining the conjugal conundrums facing impoverished male converts who, despite strong religious prescriptions to marry, are nonetheless likely to avoid or postpone marriage due to a set of contradictions that Christian conversion fails to resolve and may even exacerbate. PDF

The analytic paradigms of race and nation have dominated scholarship on the Dominican Republic and have framed social and cultural analysis in ways that have limited the theorizing of Dominican materials to a narrow focus on identity. These gatekeeping concepts have been especially influential in shaping Dominican studies in the United States and in defining the predominant questions of interest in the field. This article assesses the conceptual limits of race and nation as persistent modes of analysis applied to the Dominican Republic and evaluates how these restrictive themes both shape and are shaped by conventional ideas about Dominican society. We argue for deeper engagement with homegrown scholarship and voices on the ground in order to move beyond repetitive and provincial concerns with “Dominicanness” and to trouble the far-too-common portrayal of the country as a novel racial problem.

“New Directions in the Anthropology of Religion and Gender: Faith and Emergent Masculinities,” Anthropological Quarterly 91(1): 5-24, 2018

A co-authored introduction to the special collection that contextualizes the history of studies of religion and gender in anthropology through an extensive review of the relevant literatures and advances an outline for the study of religion and masculinities. PDF

“Victims of Illicit Desire: Pentecostal Men of God and the Specter of Sexual Temptation,” Anthropological Quarterly 91(1): 133-172, 2018 For men in the context of urban poverty in the Dominican Republic, Pentecostal conversion may lead to conditions of gender distress: frustration stemming from the challenges of reconciling the conflicting gender ideals of the church with those of the street. Drawing on ethnographic research conducted with members of a Pentecostal community in the town of Villa Altagracia, I discuss how many young men come to experience the initial trials of conversion as tormenting spiritual assaults on their manhood in the form of alluring succubi. At the same time, male converts adopt newly inspired antagonisms with women familiars whom they blame for their illicit desires. Elsewhere I have discussed the strategies Pentecostal men deploy in order to mediate the conflict between barrio masculinity and evangelical Christianity; here I am concerned with illustrating how this conflict is given personal and cultural expression and how the attending experience of gender distress and its symbolic elaboration shapes masculine identity and male subjectivity in the church and local faith communities. By focusing on male converts and their struggles to remain manly, this article contributes to a richer understanding of gender dynamics in Pentecostal churches and offers useful insight into how gender is variously troubled, performed, and remade through conversion and religious practice more broadly. PDF In this article, I juxtapose Pentecostal churches with youth gangs, two popular barrio institutions that at first glance appear to be irreconcilable but when considered together evince organic parallels that reveal important insights into contemporary life in urban poverty. Reflecting on ethnographic data from the Dominican Republic and elsewhere, I argue that due to an analogous ritualization of everyday life – through rigorous rules and clearly defined consequences for breaking them – both Pentecostal churches and youth gangs, despite their ostensible differences, afford a unique kind of freedom in constraint, and by providing reliable spaces of predictability, control, and mastery, have become popular stages for managing the precariousness of barrio life in late modernity. PDF

“Residual Masculinity and the Cultivation of Negative-Charisma in a Caribbean Pentecostal Community,” in The Anthropology of Religious Charisma: Ecstasies and Institutions, edited by Charles Lindholm, pp. 117- 143. New York: Palgrave Macmillan, 2013 Chapter 5 of The Anthropology of Religious Charisma: Ecstasies and Institutions, edited by Charles Lindholm, Palgrave MacMillan, 2013 This essay considers men, masculinity, and charismatic authority among Pentecostal Christians in the Dominican Republic. Based on ethnographic fieldwork in an urban barrio of Villa Altagracia, I argue that male converts reconcile the apparent antinomy between Pentecostal Christianity and barrio masculinity by exploiting their former identities in the streets as admirable and exemplary machos. Through detailed narratives of sin and redemption grounded in the particulars of their pre-conversion lives as so-called tígueres (or macho men), converts articulate and assert their maleness at the same time they satisfy the esteemed conversion ideal of transformation from sinner to saint. Those converts who demonstrate the greatest reversals of fate, those who best exemplify a personal transformation from severe depravity to unquestioned righteousness, are often attributed the most prestige and recognized as charismatic ideals and spiritual leaders in the faith community. PDF